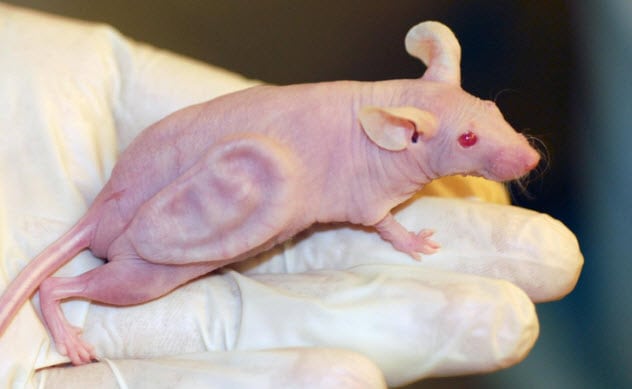 In Greek mythology, the word “chimera” refers to a fire-breathing creature that’s part-snake, part-lion, and part-goat. In the realm of science nowadays, the chimera is a much less fantastical creature. It is a biological entity with cell populations originating from two or more creatures of the same or different species. During translational biomedical research and basic research to study human developmental biology, scientists have been creating human-animal hybrids or chimeras by fusing different kinds of human cells into animals. Over the years, scientists have conducted numerous experiments to develop part-animal, part-human hybrids. Here are just some of the most popular experiments:

Monkeys with Part Human Brain
By putting human stem cells into the embryos of animals, scientists hope to grow new organs for people with faltering kidneys or hearts. Yale University once did such an experiment in 2007. They slipped human stem cells into five monkeys to observe its effects on Parkinson’s disease. The results were very promising. The monkeys that suffered from the disease could eat and walk much better than before. There were also relatively fewer problems with tremors.

Apart from improved response to the disease, the human neural cells migrated in the monkey brains and altered how they functioned. This caused some concerns, but according to researchers, the change in behavior wasn’t very significant because the number of cells used for the experiment wasn’t large enough.

Half-Human Brains in the Head of a Mouse
By injecting a smaller number of human cells into mice, researchers have created human-mice hybrids with half-human brains. As expected, these hybrid mice are smarter and performed much better in tests for cognition and memory. Scientists claim that giving mice a type of immature human brain cell, called a glial cell, resulted in their brains growing differently, so they became more human-like.

While the hybrid mice still had their own neurons, the cells that store and transmit information in the brain were almost entirely human. The results have raised the prospect that it may be possible to inject animals with human brain cells to make them smarter.

Human Ear Growing on the Back of a Mouse
Back in the 90s, the bizarre photos of a mouse with an ear on its back surfaced. These images weren’t faked as the ear was actually made grown from cow cartilage. The animal has become known as the Vacanti mouse or “Earmouse”. It continued to grow this out of its back until it formed the shape and size of a human ear. The researchers published their research in Plastic and Reconstructive Surgery in 1997. The purpose of the experiment was to test the feasibility of tissue growth for later transplant to human patients.

The Earmouse was meant to help scientists and researchers understand how to grow body parts in humans, using their own cartilage cells and skin cells.

The Human-Rabbit
In 2003 scientists from Shanghai successfully grew human cells inside rabbit eggs. The embryos were growing with more human DNA than rabbits. They claim to have never let them grow for more than a few days, so who knows what would have come of these Human-Rabbit beings.

The Human-Chimp
One of the more controversial chimeras is the half-human half chimpanzee that two scientists from China created back in 1967. They had found a way to impregnate a chimp with human sperm. This experiment was cut short due to the cultural revolution, which caused the scientists to be sent to labor farms. The 3-month pregnant chimp, unfortunately, died due to neglect.

These are just some of the popular experiments to create real human-animal hybrids. While these experiments are performed for the advancement of biomedical research, they continue to be a subject of major ethical debate.

and probably any other social media or music stream site that you can think of!